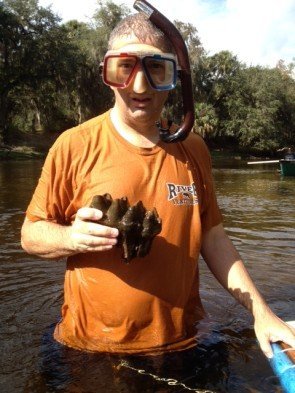 This was Larry’s first time fossil hunting in the Peace River although he was no novice to snorkeling in Florida rivers-his shirt even says river ventures! So, off we went on the hunt to parts unknown (at least to Larry and his mom.) 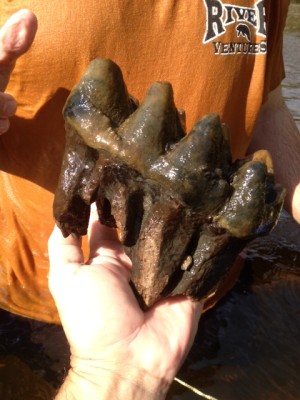 After a pretty good paddle, we arrived at the site and did a lot of what usually works, which is digging and sifting the river gravel. Since he was a pretty good snorkeler, and the water was clear, he decided to get a better look at the hole we were digging from down below. A few nice shark teeth and bone fragments turned up- not bad. Then Larry takes the shovel and digs while standing in the hole with his face in the water.

“That’s the most beautiful thing I’ve ever seen” was the next thing I heard. Up comes Larry with a big tooth. Not just a tooth. but a whole Mastodon tooth with the roots and all. 6-1/2″ long. Not bad for for your first fossil tour!

Mammoths and Mastodons both are relatives of modern elephants. They were both widespread in North America, from northern Canada to Florida and southern California. Although they lived in the same general areas, Mastodons were more browsers of leafy plant vegetation while mammoths were grazers, primarily eating grass. This lessened competition for food and other resources.

They were the largest land animals living in the Pleistocene epoch or ice-age, as it’s commonly known. Extinction for both mammoths and Mastodons came approximately 11,000 years ago at the end of the Pleistocene, which also marks the extinction of many other large animals of the time, collectively known as mega-fauna.

Our guided fossil hunting tours are arranged by reservation on weekends and weekdays all year. It helps both you and us to give at least a few days notice before booking your tour but don’t hesitate to give us a try the night before if need be. A deposit is not required. We generally are reaching areas by canoe with boats and equipment we supply but we also can do walk-in tours without a canoe. Please call (772) 539-7005 or email  fredmazza at paleodiscoveries dot com  for more info or visit www.paleodiscoveries.com or http://scottg17.sg-host.com

Hope to see you on the river! 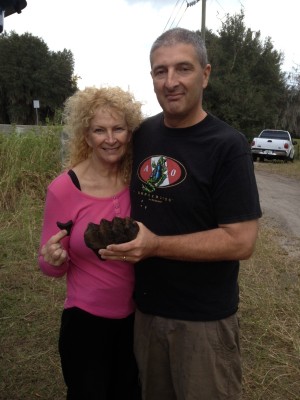