Out of all the adventures I’ve had in life, fossil hunting with Fred is at the top of my list!      ~ Guy LeFebvre 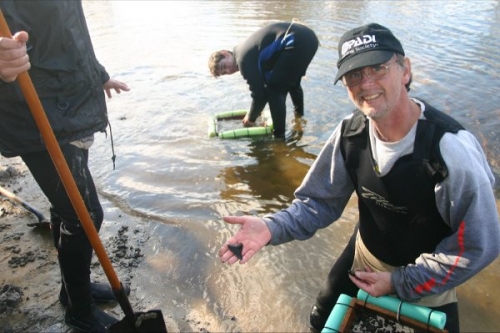 Sharks teeth fossils are amazing, they are a piece of history, but not only due to the fact that many of the sharks they come from are extinct, but also because of the history behind them.

Sharks teeth fossils were used to form tools and weapons such as saws, clubs. daggers and even for food preparation. The oldest known record of sharks teeth fossils being discovered was by Pliny the elder who thought them to have come from a lunar eclipse.  Further, more people often mistook them for petrified tongues of dragons or snakes.

Finding these amazing fossils allows you to have a piece of ancient history in your hand for these sharks would have been plentiful millions of years ago. Sharks teeth fossils are the most commonly found vertebrate fossils due to sharks’ continuously shedding their teeth, so for most budding paleontologists, this is generally their first find. They “cut their teeth” on them as it were.

If you want to find your very own sharks teeth fossils then we can help. Start your fossil collection today or add to what you already have with one of our tours. Fill out the form below and begin your fossil hunting adventures!

What Our Client’s Say